QUESTION 1
What is the function of the command switchport trunk native vlan 999 on a Cisco Catalyst switch?

QUESTION 2
A switch is configured with all ports assigned to VLAN 2. In addition, all ports are configured as full-duplex FastEthernet. What is the effect of adding switch ports to a new VLAN on this switch?

A. The additions will create more collisions domains.
B. An additional broadcast domain will be created.*
C. More bandwidth will be required than was needed previously.
D. IP address utilization will be more efficient.

QUESTION 3
What are three benefits of implementing VLANs? (Choose three)

A. A more efficient use of bandwidth can be achieved allowing many physical groups to use the same network infrastructure

B. Broadcast storms can be mitigated by decreasing the number of broadcast domains, thus increasing their size.

C. A higher level of network security can be reached by separating sensitive data traffic from other network traffic.*

E. A more efficient use of bandwidth can be achieved allowing many logical networks to use the same network infrastructure.*

F. Broadcast storms can be mitigated by increasing the number of broadcast domains, thus reducing their size.*

G. VLANs make it easier for IT staff to configure new logical groups, because the VLANs all belong to the same broadcast domain.

QUESTION 4
Which IEEE standard protocol is initiated as a result of successful DTP completion in a switch over Fast Ethernet?

QUESTION 5
Which of the following are benefits of VLANs? (Choose three.)

QUESTION 6
Which two commands can be used to verify a trunk link configuration status on a given Cisco switch? (Choose two) 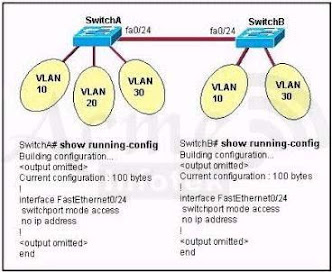 Refer to the Exhibit.
All switch ports are assigned to the correct VLANs, but none of the hosts connected to SwitchA can communicate with hosts in the same VLAN connected to SwitchB. Based on the output shown, what is the most likely problem?

QUESTION 8
What is the function of the command switchport trunk native vlan 999 on a trunk port?

QUESTION 10
Assuming the default switch configuration, which VLAN range can be added, modified, and removed on a Cisco switch?

QUESTION 11
Which statement about VLAN operation on Cisco Catalyst switches is true?

A. When a packet is received from an 802.1Q trunk, the VLAN id can be determined from the source MAC address table.
B. Unknown unicast frames are retransmitted only to the ports that belong to the same VLAN.*
C. Ports between switches should be configured in access mode so that VLANs can span across the ports.
D. Broadcast and multicast frames are retransmitted to ports that are configured on different VLAN. 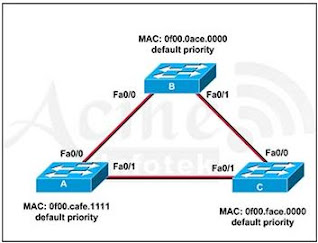 Refer to the topology shown in the exhibit.
Which ports will be STP designated ports if all the links are operating at the same bandwidth? (Choose three.) 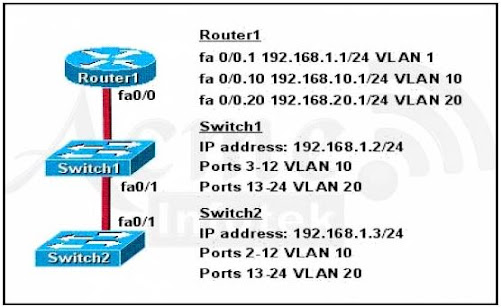 Refer to the exhibit.
How should the FastEthernet0/1 ports on the 2950 model switches that are shown in the exhibit be configured to allow connectivity between all devices?

A. The ports only need to be connected by a crossover cable. 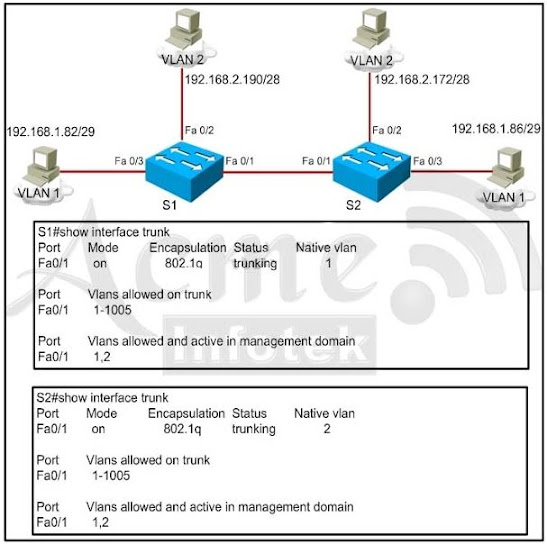 A frame on VLAN 1 on switch S1 is sent to switch S2 when the frame is received on VLAN 2. What causes this behavior?

A. Trunk mode mismatches
B. VLANs that do not correspond to a unique IP subnet
C. Native VLAN mismatches*
D. allowing only VLAN 2 on the destination. 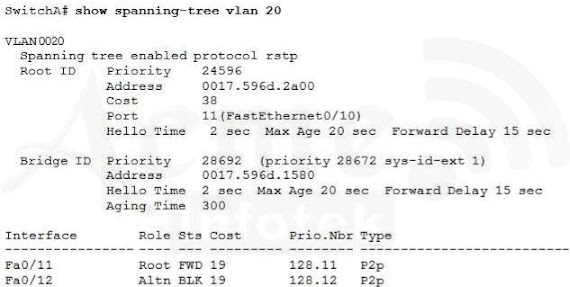 Refer to the exhibit. Which statement is true? 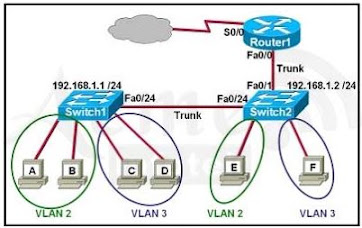 Refer to the exhibit.
Which two statements are true about interVLAN routing in the topology that is shown in the exhibit? (Choose two.)

A. Host E and host F use the same IP gateway address.
B. Router1 and Switch2 should be connected via a crossover cable.
C. Router1 will not play a role in communications between host A and host D.
D. The FastEthernet 0/0 interface on Router1 must be configured with subinterfaces.*
E. Router1 needs more LAN interfaces to accommodate the VLANs that are shown in the exhibit.
F. The FastEthernet 0/0 interface on Router1 and Switch2 trunk ports must be configured using the same encapsulation type.* 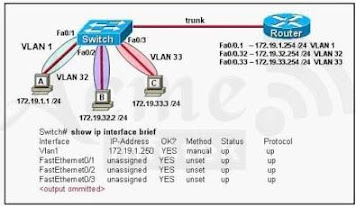 A. Host B and the switch need to be in the same subnet.
B. The switch needs an appropriate default gateway assigned.*
C. The switch interface connected to the router is down.
D. Host B needs to be assigned an IP address in VLAN 1.

QUESTION 19
As a network technician, do you know which are valid modes for a switch port used as a VLAN trunk? (Choose three.)

QUESTION 20
Which three of these statements regarding 802.1Q trunking are correct? (Choose three.) 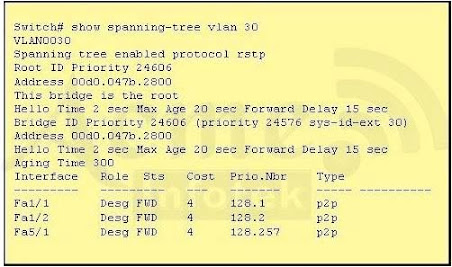 Refer to the exhibit.
The output that is shown is generated at a switch. Which three of these statements are true? (Choose three.)

A. All ports will be in a state of discarding, learning, or forwarding.*
B. Thirty VLANs have been configured on this switch.
C. The bridge priority is lower than the default value for spanning tree.*
D. All interfaces that are shown are on shared media.
E. All designated ports are in a forwarding state.*
F. This switch must be the root bridge for all VLANs on this switch.

QUESTION 22
What are the possible trunking modes for a switch port? (Choose three.)

QUESTION 23
What are three advantages of VLANs? (Choose three.) 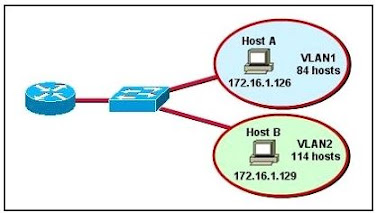 Refer to the diagram. All hosts have connectivity with one another. Which statements describe the addressing scheme that is in use in the network? (Choose three.) 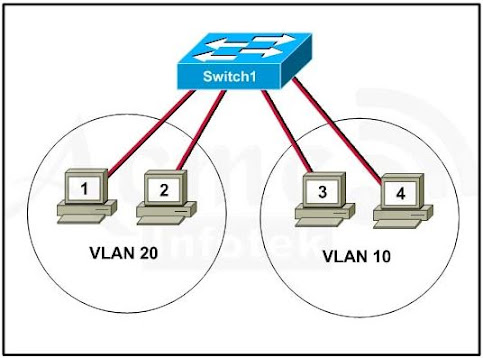 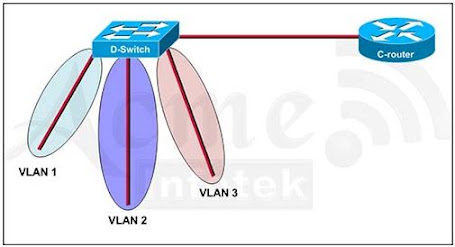 Refer to the exhibit.
C-router is to be used as a "router-on-a-stick" to route between the VLANs. All the interfaces have been properly configured and IP routing is operational. The hosts in the VLANs have been configured with the appropriate default gateway. What can be said about this configuration?

B. No further routing configuration is required. ****** 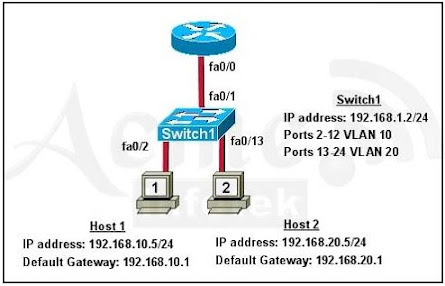 Refer to the exhibit.
What commands must be configured on the 2950 switch and the router to allow communication between host 1 and host 2? (Choose two.)

QUESTION 28
Which three elements must be used when you configure a router interface for VLAN trunking? (Choose three.) 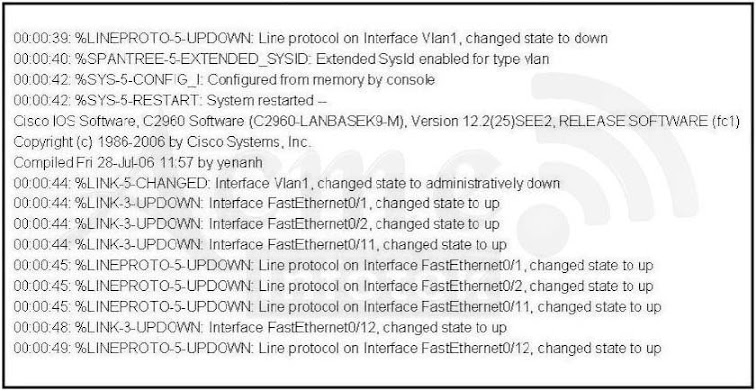 Refer to the exhibit.
Which of these statements correctly describes the state of the switch once the boot process has been completed?

A. As FastEthernet0/12 will be the last to come up.it will not be blocked by STP.
B. Remote access management of this switch will not be possible without configuration change.*
C. More VLANs will need to be created for this switch.
D. The switch will need a different IOS code in order to support VLANs and STP.

QUESTION 30
A router has two Fast Ethernet interfaces and needs to connect to four VLANs in the local network. How can you accomplish this task, using the fewest physical interfaces and without decreasing network performance?

QUESTION 31
Cisco Catalyst switches CAT1 and CAT2 have a connection between them using ports FA0/13. An 802.1Q trunk is configured between the two switches. On CAT1, VLAN 10 is chosen as native, but on CAT2 the native VLAN is not specified. What will happen in this scenario? 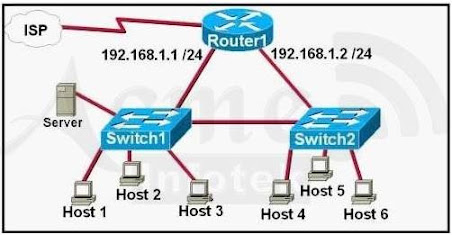 Refer to the exhibit.
A network technician is asked to design a small network with redundancy. The exhibit represents this design, with all hosts configured in the same VLAN. What conclusions can be made about this design?

A. This design will function as intended.
B. Spanning-tree will need to be used.
C. The router will not accept the addressing scheme.*
D. The connection between switches should be a trunk.
E. The router interfaces must be encapsulated with the 802.1Q protocol. 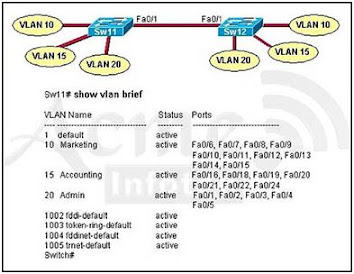 Refer to the topology and router output shown in the exhibit. A technician is troubleshooting host connectivity issues on the switches. The hosts in VLANs 10 and 15 on Sw11 are unable to communicate with hosts in the same VLANs on Sw12. Hosts in the Admin VLAN are able to communicate. The port-to-VLAN assignments are identical on the two switches. What could be the problem?

A. The Fa0/1 port is not operational on one of the switches.
B. The link connecting the switches has not been configured as a trunk.*
C. At least one port needs to be configured in VLAN 1 for VLANs 10 and 15 to be able to communicate.
D. Port FastEthernet 0/1 needs to be configured as an access link on both switches.
E. A router is required for hosts on Sw11 in VLANs 10 and 15 to communicate with hosts in the same VLAN on Sw12. 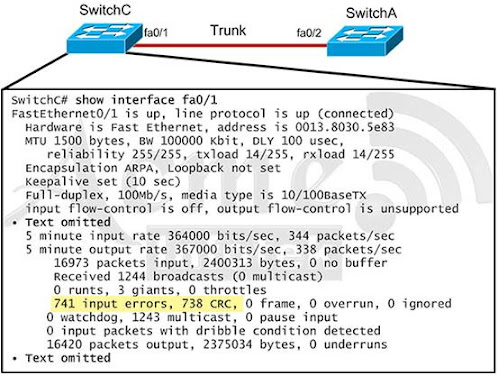 Refer to the exhibit.
Given this output for SwitchC, what should the network administrator's next action be?

QUESTION 35
VLAN 3 is not yet configured on your switch. What happens if you set the switchport access
vlan 3 command in interface configuration mode?

Refer to the exhibit.
The network shown in the diagram is experiencing connectivity problems. Which of the following will correct the problems? (Choose two.)

Refer to the exhibit.
A problem with network connectivity has been observed. It is suspected that the cable connected to switch port Fa0/9 on Switch1 is disconnected. What would be an effect of this cable being disconnected? 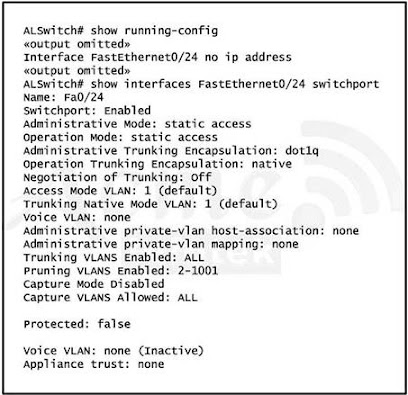 Refer to the exhibit.
Switch port FastEthernet 0/24 on ALSwitch1 will be used to create an IEEE 802.1Q-compliant trunk to another switch. Based on the output shown, what is the reason the truck does not form, even though the proper cabling has been attached?

QUESTION 39
In a switched environment, what does the IEEE 802.1Q standard describe?

A. the operation of VTP
B. a method of VLAN trunking*
C. an approach to wireless LAN communication
D. the process for root bridge selection
E. VLAN pruning