Which layer in the OSI reference model is responsible for determining the availability of the receiving program and checking to see if enough resources exist for that communication?

C. This is an Ethernet port operating at half duplex.*

D. This is an Ethernet port operating at full duplex.

E. This is a port on a network interface card in a PC.

A receiving host computes the checksum on a frame and determines that the frame is damaged. The frame is then discarded. At which OSI layer did this happen?

Which of the following correctly describe steps in the OSI data encapsulation process? (Choose two)

A. The transport layer divides a data stream into segments and may add reliability and flow control information.*

B. The data link layer adds physical source and destination addresses and an FCS to the

C. Packets are created when the network layer encapsulates a frame with source and

D. Packets are created when the network layer adds Layer 3 addresses and control information to a segment.*

E. The presentation layer translates bits into voltages for transmission across the physical link.

Refer to the graphic. 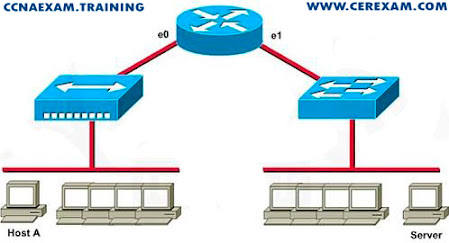 Host A is communicating with the server. What will be the source MAC address of the frames received by Host A from the server?

A. the MAC address of the server network interface

B. the MAC address of host A

Refer to the exhibit. 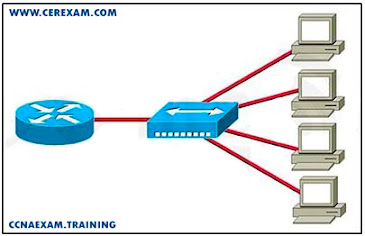 What two results would occur if the hub were to be replaced with a switch that is configured with one Ethernet VLAN? (Choose two.)

A. The number of broadcast domains would remain the same.*

B. The number of collision domains would increase.*

C. The number of collision domains would decrease.

D. The number of broadcast domains would decrease.

E. The number of collision domains would remain the same.

F. The number of broadcast domains would increase.

For what two purposes does the Ethernet protocol use physical addresses? (Choose two.)

A. to uniquely identify devices at Layer 2*

B. to allow communication with devices on a different network

C. to differentiate a Layer 2 frame from a Layer 3 packet

D. to establish a priority system to determine which device gets to transmit first

E. to allow communication between different devices on the same network*

F. to allow detection of a remote device when its physical address is unknown

In an Ethernet network, under what two scenarios can devices transmit? (Choose two.)

A. when they receive a special token

B. when there is a carrier

C. when they detect no other devices are sending*

D. when the medium is idle*

Which of the following statements describe the network shown in the graphic? 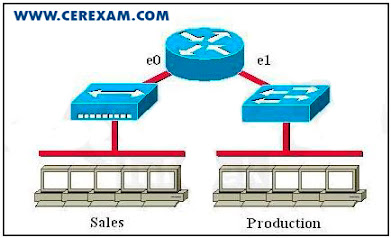 What are the proper statements?. (Choose two)

A. There are two broadcast domains in the network.*

B. There are four broadcast domains in the network.

C. There are six broadcast domains in the network.

D. There are four collision domains in the network.

E. There are five collision domains in the network.

F. There are seven collision domains in the network.*

How many broadcast domains are shown in the graphic assuming only the default VLAN is configured on the switches?

What is the first 24 bits in a MAC address called?