QUESTION 1
Which command can you use to manually assign a static IPv6 address to a router interface?

QUESTION 2
The network administrator is asked to configure 113 point-to-point links. Which IP addressing scheme best defines the address range and subnet mask that meet the requirement and waste the fewest subnet and host addresses?

QUESTION 3
A Cisco router is booting and has just completed the POST process. It is now ready to find and load an IOS image. What function does the router perform next?

Refer to the exhibit. The technician wants to upload a new IOS in the router while keeping the existing IOS. What is the maximum size of an IOS file that could be loaded if the original IOS is also kept in flash? 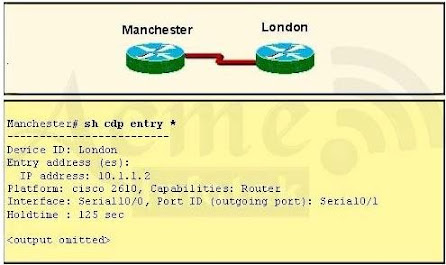 Refer to the exhibit.
The two exhibit devices are the only Cisco devices on the network. The serial network between the two devices has a mask of 255.255.255.252. Given the output that is shown, what three statements are true of these devices? (Choose three.)

QUESTION 7
Before installing a new, upgraded version of the IOS, what should be checked on the router, and which command should be used to gather this information? (Choose two.)

QUESTION 8
Which command reveals the last method used to powercycle a router? 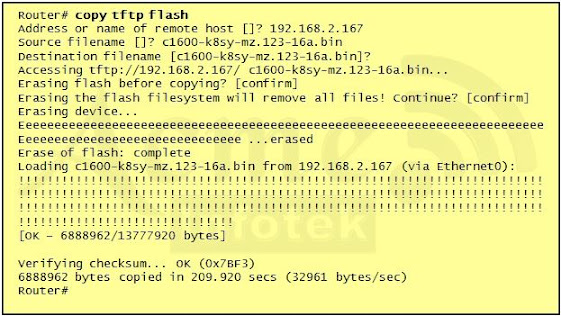 Why is flash memory erased prior to upgrading the IOS image from the TFTP server?

A. In order for the router to use the new image as the default, it must be the only IOS image in flash.
B. Flash memory on Cisco routers can contain only a single IOS image.
C. Erasing current flash content is requested during the copy dialog.*
D. The router cannot verify that the Cisco IOS image currently in flash is valid.

QUESTION 10
Which command would you configure globally on a Cisco router that would allow you to view directly connected Cisco devices?

QUESTION 11
Which two locations can be configured as a source for the IOS image in the boot system command? (Choose two.)

QUESTION 12
Which two statements describe the process identifier that is used in the command to configure OSPF on a router? (Choose two.)
Router(config)# router ospf 1 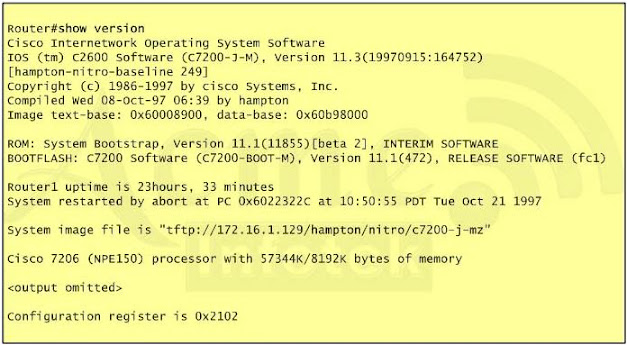 Refer to the exhibit.
For what two reasons has the router loaded its IOS image from the location that is shown? (Choose two)

A. Router1 has specific boot system commands that instruct it to load IOS from TFTP server.*
B. Router1 is acting as a TFTP server for other routers.
C. Router1 cannot locate a valid IOS image in flash memory.*
D. Router1 defaulted to ROMMON mode and loaded the IOS image from a TFTP server.
E. Cisco routers will first attempt to load a image from TFTP for management purposes.

Refer to the exhibit. Which rule does the DHCP server use when there is an IP address conflict?

QUESTION 16
How does using the service password-encryption command on a router provide additional security?

QUESTION 17
A network administrator needs to allow only one Telnet connection to a router. For anyone viewing the configuration and issuing the show run command, the password for Telnet access should be encrypted. Which set of commands will accomplish this task?

QUESTION 18
What is the effect of using the service password-encryption command?

Refer to the exhibit. What is the effect of the configuration that is shown?

QUESTION 20
Which command enables IPv6 forwarding on a Cisco router?

QUESTION 22
Which will fix the issue and allow ONLY ping to work while keeping telnet disabled?

What would be the effect of issuing the command ip access-group 114 in to the fa0/0 interface?

QUESTION 24
A network administrator changes the configuration register to 0x2142 and reboots the router. What are two results of making this change? (Choose two.)